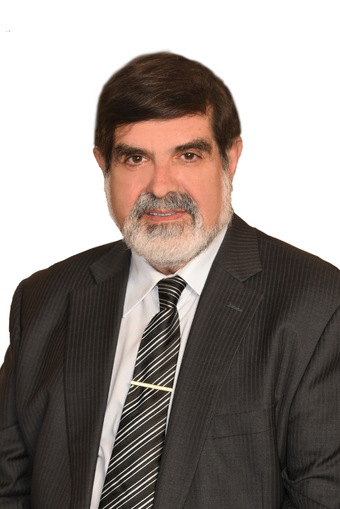 He has completed a course of advanced theoretical music and piano studies, taught by the composer DIMITRIS SINOURIS and the professor of theoretical music studies CHRISTOS XANTHAKIS at "ELLINIKO" and "ACHAIKO" Conservatories.

Being very keen on choral music he worked on it since his childhood, not only as a chorister, but also as a creator of small groups, while at the same time he attended a course of seminars on choir conducting in Greece and abroad, such as the ZOLTAN KODALY seminar in 1984 in KECKSEMET-Hungary and other seminars by ANTONIS KONTOGEORGIOU and ISTVAN PARKAI.

He had been the conductor of PATRAIKI MANTOLINATA-MIXED CHOIR from 1979 to February 1983. At the same time he conducted the CHILDREN and MIXED group of ARMONIA CHOIR in Preveza from September 1982 to the end of 1990.

He also founded the annual INTERNATIONAL CHOIR FESTIVAL OF PREVEZA, being its Artistic Director for 8 years.

In April 1983 together with a group of citizens of Patras keen on music founded the POLYPHONIC CHOIR OF PATRAS, being its Artistic Director as well as the conductor of its MIXED CHOIR and FEMALE CHAMBER CHOIR.

As a choirs’ conductor he has given more than 1000 concerts in his 25 year choral action not only in Greece but also in Bulgaria, England, Yugoslavia, Italy, Spain, Hungary, Poland, Sweden, Germany, Belgium, Wales, Austria, Czechoslovakia, France, Japan, and Bosnia-Herzegovina.

He has a degree in Singing, Harmony, Counterpoint and Fugue and he has been awarded in 28 National and International choir competitions in which he took part with the MIXED CHOIR of Patraiki Mantolinata, the CHILDREN CHOIR ARMONIA of Preveza, the WOMEN CHOIR of ACHAIKO CONSERVATORY of Patras and last but not least with the MIXED and FEMALE CHAMBER CHOIR of Polyphonic.

Additionally, with the MIXED CHOIR of Polyphonic was awarded with two bronze medals in the category of classical and folklore pieces in LINZ-Austria in July 2000 as well as with the 1rst Prize and the Gold Medal in the International Choir Festival of Nafpaktos in November 2003.

In December 1996 he was awarded with the supreme honour by the UNION OF GREEK CHOIRS for his contribution to Greek choral music. He participated in the World Choir Symposium, by IFCM in ROTTERDAM-Holland-1999, in MINNEAPOLIS-Minnesota of U.S.A-2002 and in KYOTO- Japan 2005. Also, he participated in the General Assembly of Europa Cantat [2001 in Hungary and 2006 in Sweden] and presented the Choral life in Greece, during Seminary for the Choir conductors in Tel-Aviv Israel. He has also been a founding member of the Choir Conductors’ Pan-Hellenic Association and a member of its 1rst Board of Directors.

He teaches advanced theoretical music in "ACHAIKO" Conservatory (group of POLYPHONIC) and he has been EMPORIKI’ S BANK executive for 33 years.

He aims at raising Patras cultural level with the choral’s music contribution to the public and the creation of advanced choral groups in order to perform musical pieces properly in Greece and abroad.